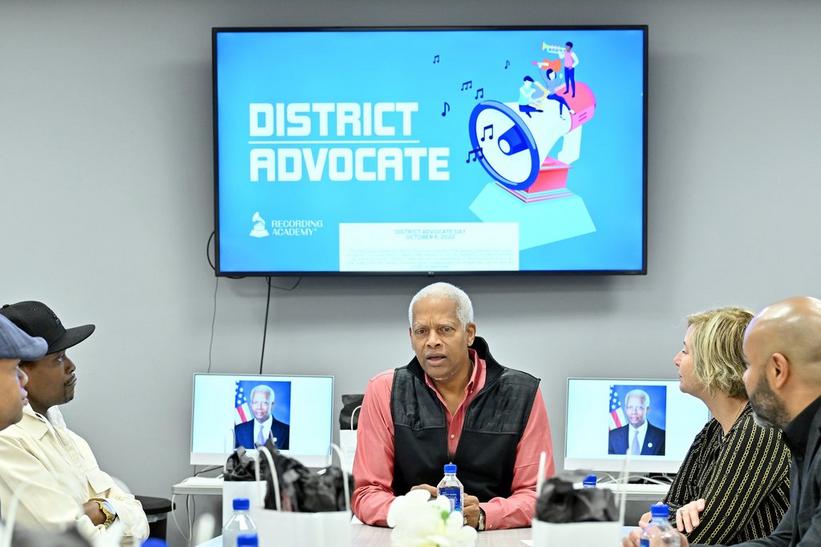 District Advocate Day 2022 Is A Wrap. What Was Accomplished, And How Do We Move Forward?

The Recording Academy's District Advocate program is the largest grassroots advocacy movement for music and its makers. Here's what its 2022 edition accomplished, and how we can keep that energy going into the future.

"Being an advocate," it continues, "means staying active in the weeks leading up to the meetings to help advance key priorities through social media and calls-to-action on specific legislative issues."

In tandem with that, it's important not only to celebrate the sizable accomplishments of District Advocate Day 2022 — but look ahead to how we can maintain that momentum, and continue to fight for all music people worldwide.

On that day — which fell on Oct. 6 — Recording Academy members visited the local district offices of their elected representatives to discuss issues affecting their livelihoods and careers. including fairer compensation for songwriters, performers, and studio professionals.

But with the largest grassroots advocacy movement for music and its makers now in the rearview, it's crucial to consider how we can keep the energy going throughout the following year — until District Advocate Day meets us again in the fall of 2023.

District Advocate Day was a big success, and helped advance music makers' policy priorities with lawmakers across the country. Here are some heartening details of the practical impact of this crucial day in music advocacy:

The main purpose of District Advocate day is to advance legislation that would benefit music and music makers. And this year was no exception, with Recording Academy members advocating for four bills being considered by the 117th Congress. On October 6, members across the country met with lawmakers in support of the HITS (Helping Independent Tracks Succeed) Act,the PEACE (Promoting Peace, Education, and Cultural Exchange) Through Music Diplomacy Act, the American Music Fairness Act, and The RAP (Restoring Artistic Protections) Act.

And just a few weeks after the coast-to-coast day of action, these important bills have garnered the support of 13 new co-sponsors– all while Congress isn't in session– giving them momentum to close out the year strongly.

These Music People And Lawmakers Reacted On Social

Here's a heartfelt tweet from an engineer and Recording Academy member who participated:

Chair of the Black Music Collective Rico Love and GRAMMY-winning artist PJ Morton encouraging members to get involved with DA:

Below, CA-37 US Congressional District Director Jacqueline Hamilton (a staffer for Rep. Karen Bass) meets with the LA Chapter and listens to their team captains about the key legislation.

And, finally, the POV of a District Advocate can be found below:

How Can We Keep The Flame Of District Advocate 2022

Didn't get enough of District Advocate in just one day? Well, you can be an advocate for music and music makers year-round. Here are some easy ways to get involved:

Take action and write to your lawmakers. You can do so via this handy link courtesy of Recording Academy Advocacy.

Vote on Election Day to ensure that music is represented in Washington and in your home state.

Get more involved with your local Academy chapter for future events, dialogues, and opportunities. For more information about Recording Academy membership, visit here.

Visit RecordingAcademy.com/Advocacy to read the latest news and updates on policy matters.

With these steps taken, you can be a crucial part of our fight for all music people — until the next District Advocate Day comes along!