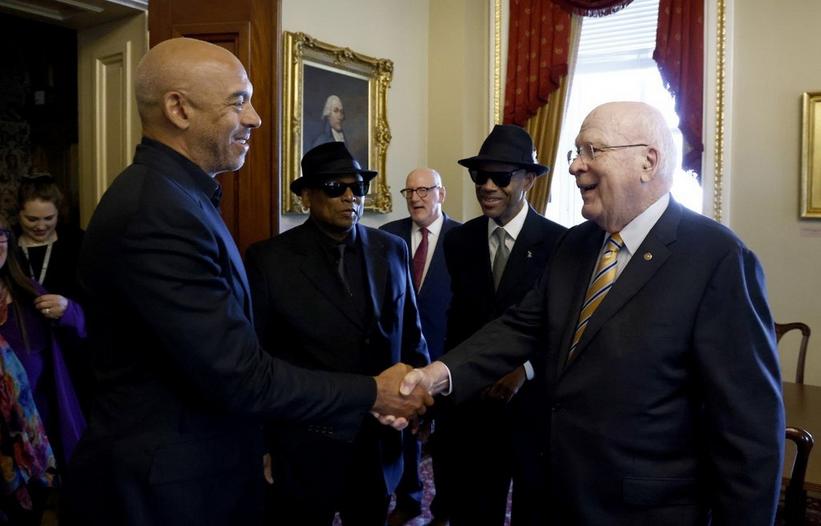 The PEACE Through Music Diplomacy Act directs the State Department to leverage partnerships with the private sector when designing and implementing its music-related exchange programs.

Earlier this year, H.R. 6498, the PEACE (Promoting Peace Education, and Cultural Exchange) Through Music Diplomacy Act was introduced in the House of Representatives. Sponsored by the 2022 GRAMMYs on the Hill Honorees, Rep. Michael McCaul (R-TX) and Rep. Ted Deutch (D-FL), the bill would use music, and music-related global exchange programs, as a tool to build cross-cultural understanding, and advance peace abroad.

Aligned with last month's GRAMMYs on the Hill advocacy day, Reps. McCaul and Deutch wrote a "Dear Colleague" letter to their fellow members of Congress urging them to co-sponsor the PEACE Through Music Diplomacy Act so that it may become law. In this letter, the bipartisan lawmakers outlined how important music is to international relations.

As they wrote, "music is a powerful tool that can be used to bridge divides and promote peace around the world," calling the medium "the universal language." Reps. McCaul and Deutch continued, stating the bill would allow the Secretary of State to recognize musicians who have been effective in advancing peace abroad and highlighting the Recording Academy's support of the bill.

Their message was further amplified by music advocates who came to Washington D.C. to help advance the bill. Five-time GRAMMY winner Jimmy Jam, who, along with his collaborator Terry Lewis, was the artist honoree at GRAMMYs on the Hill, made a powerful statement.

"Music is bipartisan. I always look at it as a quilt: different colors, different ages, Democrats, Republicans, people that maybe don't even speak the same language around the world, but music is the universal language," he said. "As soon as you put a song on, you watch people's heads nod at the same time. … Music is the thing that brings us together."

In a joint statement, Senators Leahy and Tillis recognized the Recording Academy's support of this bill and made statements on the importance of its passage. Tillis stated, "America's creative industries spread our values — freedom, liberty, justice, and hope — throughout the world. I'm proud to partner with my friend Senator Leahy to promote America's music industries and all the values we share and treasure with the people of the world. I look forward to working with our colleagues in the House to get this commonsense measure passed into law."

"The Recording Academy is grateful to Senators Leahy and Tillis for introducing the PEACE Through Music Diplomacy Act in the Senate. Just two weeks ago at GRAMMYs on the Hill, we witnessed the ability of music to bring people together and build bridges," he said. "This important legislation will ensure that music and music creators continue to play a key role in promoting peace and fostering connection around the world by strengthening cultural exchange programs at the State Department.  We look forward to working with the Senators and with our House sponsors to see the PEACE Through Music Diplomacy Act passed into law."

The Recording Academy will work to further advance the bipartisan and bicameral bill this summer with the ultimate goal of bringing it to President Biden's desk to become law.

How The 2022 GRAMMYs On The Hill Awards Brought Joy, Healing & Reverence For Music People