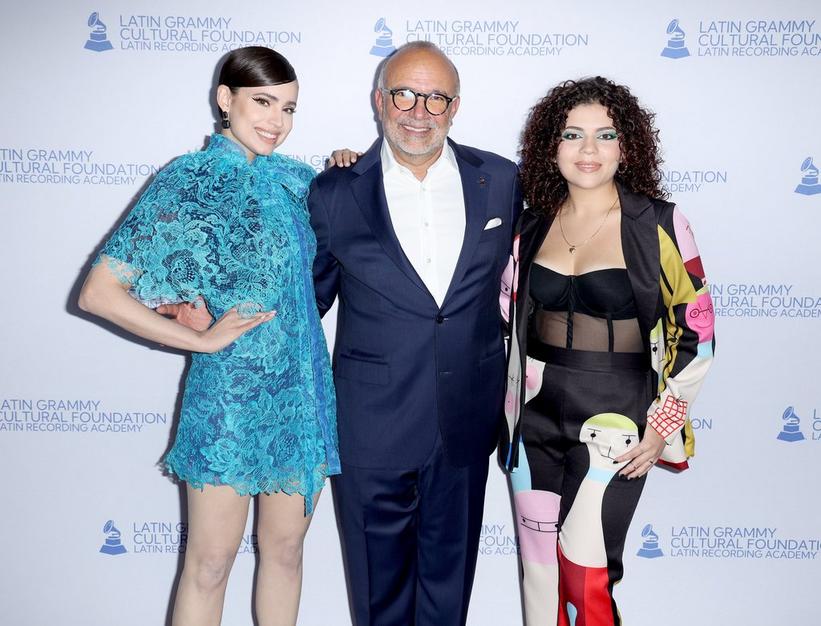 The Prodigy Scholarship (Sofia Carson Scholarship) holds a maximum value of $200,000 and allows García to pursue a bachelor's degree at Berklee College of Music in Boston, starting this fall.

The Latin GRAMMY Cultural Foundation awarded the Sofia Carson Scholarship to 19-year-old vocalist and student Valentina García during a special presentation with the artist in Miami.

The Prodigy Scholarship (Sofia Carson Scholarship) — created eight years ago to support music education and the Latin music genres — holds a maximum value of $200,000 and allows García to pursue a bachelor's degree at Berklee College of Music in Boston, starting this fall.

The Venezuelan native was selected by the Foundation's Scholarship Committee from a highly competitive group of hundreds of applicants worldwide. Since its establishment, the Latin GRAMMY Cultural Foundation has committed an extraordinary sum of more than $7.6 million in scholarships, grants, musical instruments, and educational events throughout the United States and Ibero-America.

"Year after year, we are humbled and inspired by the sheer volume and quality of scholarship entries from future Latin music creators committed to pursuing their dreams," said Manuel Abud, CEO of The Latin Recording Academy. "Since its inception and against adversities, our Foundation has been focused on awarding nearly $1 million in scholarships each year, thanks to the generosity of artists such as Sofia Carson, who continues to solidify the legacy of Latin music and preserve this program for future generations."

"It has been my privilege to witness the Latin GRAMMY Cultural Foundation's transformational mission, changing lives through the power of music education," said Sofia Carson, Global Ambassador of the Latin GRAMMY Cultural Foundation. "It is my honor to partner with my Foundation family to present Valentina with the Prodigy Scholarship. She is an ever-deserving, brilliant young woman whose voice and talent awed us. Together, may we continue to amplify and lift powerful Latin voices, in every corner of our world."

"Together, Sofia Carson and the Latin GRAMMY Cultural Foundation have changed my life for the better. I am forever grateful for their generosity and the doors they have opened," said García. "My journey is only beginning, as I bare witness to the impact the Foundation has made on the lives of Latin musicians around the world, I am determined to pay it forward and be a voice for those who are most in need."

The Foundation also announced the recipients of its annual Gifted Tuition Scholarships and Tuition Assistance Scholarships, that will allow 43 talented students from diverse backgrounds the opportunity to pursue an education at some of the most prestigious musical institutions in the world.

The following three students will each receive the Gifted Tuition Scholarship, with a maximum value of $100,000, which will support the tuition costs of four years of study at the university or college of their choice are:

In addition, the following 40 students will each receive the Tuition Assistance Scholarship, a one-time scholarship with a maximum value of $10,000 toward the tuition costs for the university or college of their choice: