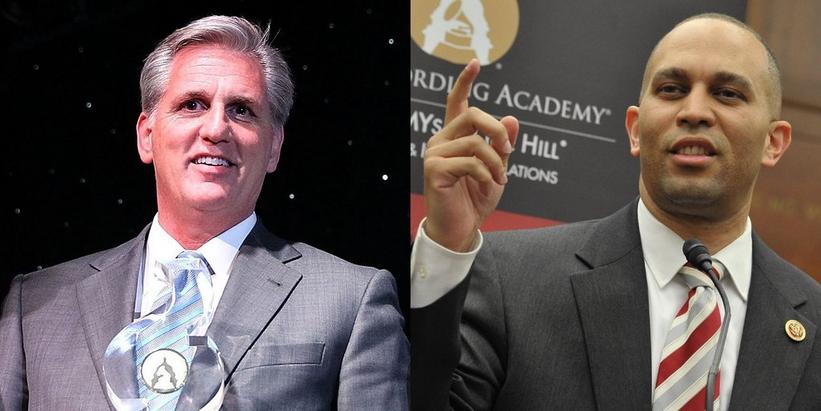 Kevin McCarthy & Hakeem Jeffries Elected To Lead the House Of Representatives: How Both Leaders Have Supported Music

The new Speaker of the House, Kevin McCarthy, and new House Democratic Leader, Hakeem Jeffries, have continuously demonstrated their commitment to advancing pro-music legislation while in Congress.

The 118th Congress is underway — and lucky for the music community, the top party leaders in the House of Representatives are also strong supporters of music creators.

The new Speaker of the House Kevin McCarthy (R-CA) and new Democratic Leader Hakeem Jeffries (D-NY) have continuously demonstrated their commitment to advancing pro-music legislation while in Congress.

For their many years of support of music makers and their dedication to creators' rights, the Recording Academy has honored both McCarthy and Jeffries with the GRAMMYs On The Hill Award — McCarthy in 2014 and Jeffries in 2019.

Since 2013, McCarthy has been the co-chair of the bipartisan Recording Arts and Sciences Congressional Caucus. Together with caucus co-chair Rep. Steny Hoyer (D-MD), McCarthy gave the caucus the high-profile leadership of both the House Majority Whip and the House Minority Whip.

Since its founding with Academy consultation in 2005, the caucus has provided Members of Congress with opportunities to interface directly with music creators to better inform their understanding of the music business and the impact it has on the American economy.

In 2014, during GRAMMY Weekend in Los Angeles, Rep. McCarthy led a first-of-its-kind town hall with Recording Academy leadership. Rep. McCarthy engaged in a frank and free-flowing conversation with Academy Trustees and Chapter Presidents regarding the congressional outlook for the coming year.

The recently elected Speaker continues to consistently meet with Recording Academy members during events like GRAMMYs On The Hill.

In 2022, McCarthy met with Recording Academy CEO Harvey Mason jr., along with 5-time GRAMMY winning duo Jimmy Jam and Terry Lewis, to discuss the American Music Fairness Act, the HITS Act, and the PEACE Through Music Diplomacy Act, which was passed into law in December.

Democratic Leader Hakeem Jeffries has also long been a tireless champion for the music community. Throughout his time in Congress, Jeffries has been at the forefront of many key pieces of legislation that have benefited the music community. As a member of the Judiciary Committee, he has been one of the most influential and impactful legislators working for stronger copyright protections and a fairer music licensing system.

In 2018, he was an original cosponsor and key architect of the Music Modernization Act, which ultimately became law and was the biggest update to music licensing in over 40 years. Thanks to Jeffries's work, songwriters now receive more fair and direct royalty payments from streaming services, legacy artists are able to collect royalties for digital broadcasts, and producers and engineers are protected under copyright law.

The next year, Jeffries introduced the Copyright Alternative in Small-Claims Enforcement (CASE) Act into the House of Representatives, which was signed into law in 2020.

Jeffries has also frequently participated in different Recording Academy advocacy events. He has been a keynote speaker during GRAMMYs on The Hill and often meets with Recording Academy members while they are in Washington, D.C. to hear their perspective on the importance of passing creator-friendly legislation, most recently meeting with GRAMMY nominated rapper Cordae in 2022.

Additionally, throughout the years, he has met with Recording Academy members from his home state of New York during our District Advocacy Day. These important opportunities allowed Academy members who live in his district to advocate for the music community.

As the 118th Congress continues their work, the Recording Academy looks forward to continuing to work with these leaders and supporters of the music community — to uplift and nurture all music people.

Looking Back On 2022: One Of The Recording Academy's Most Successful Years In Advocacy