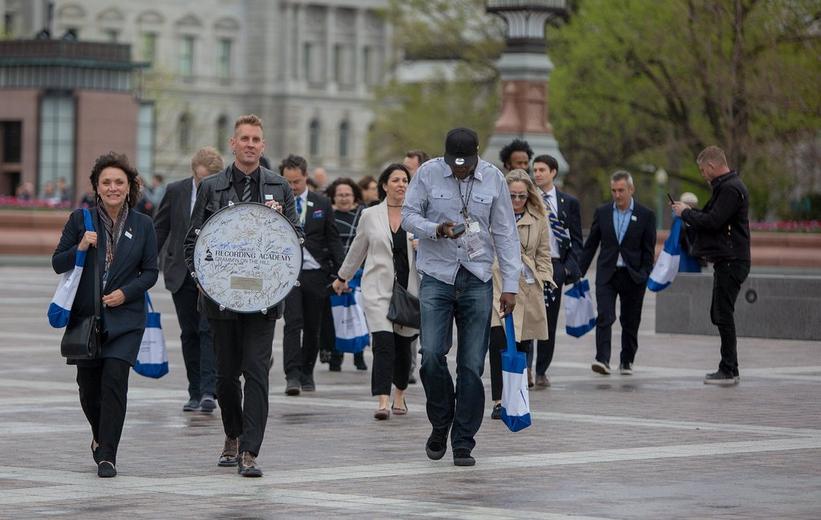 Mastodon at GRAMMYs On The Hill

Creators & Champions For Creators: These 2022 GRAMMYs Award Show Nominees Are Also Advocates For The Music Industry

Many of the nominees in the 2022 GRAMMYs Awards show are not only talented music creators, but driven advocates for the music community, too

With the announcement of the 64th GRAMMYs Awards show nominees on Nov. 23, it's abundantly clear that many of this year's nominees are not only talented music creators, but driven advocates for the music community, too.

Across genres and styles, from Jennifer Hudson to the Baylor Project to Mastodon, the following one-of-a-kind artists have taken an extra step by committing themselves to selfless aid to all music creators.

Let's take a look at the impactful advocacy work done by this year's nominees:

Did you know this household-name singer and actress is also a longtime champion for music creators? Her dedication and selflessness are why she was the GRAMMYs On The Hill honoree in 2013.

The heavy rock heroes' very own Brann Dailor and Bill Kelliher brought their talents and passion to Washington, D.C. for the 2018 GRAMMYs On The Hill to advocate for the music industry. This year, Mastodon is nominated for Best Metal Performance — a category they previously won in 2017.

Gramps Morgan is not only a singer/songwriter, producer and executive; he's continually participated in advocacy opportunities with the Recording Academy.

Most recently, the former District Advocate participated in Behind The Record Advocacy Day, where he met with Rep. Jim Cooper (D-TN). Morgan won his first GRAMMY in 2015 for Best Reggae Album and is nominated again this year for the same category.

John Popper has been a longtime champion in the fight for fair compensation for creators. Through his tweets in support of the American Music Fairness Act and participation in the 2017 GRAMMYs on the Hill, the vocalist in the soulful, long-runing rock band Blues Traveler continues to show his support.

This year, the band is nominated for Best Traditional Blues Album — their second nomination after previously winning the Best Rock Performance By A Duo Or Group With Vocal in 1995.

The celebrated recording engineer is nominated 3 times this year for his work with Justin Bieber and H.E.R., but his dedication for music goes far beyond that.

Colin Leonard has previously joined the Recording Academy for the 2019 GRAMMYs on the Hill, where he and other members spent the day meeting with congressional offices to discuss the importance of fair compensation for music creators.

Participants in both GRAMMYs on the Hill and District Advocate Day, Marcus and Jean Baylor have continually fought for creator's rights. This year, the duo's album Generations is nominated for Best Jazz Vocal Album. This is their fourth nomination.

This three-time GRAMMY nominee is also a dedicated advocate for the music industry.

Not only is Sean Ardoin the president of the Recording Academy's Memphis Chapter; he's participated in GRAMMYs On The Hill, District Advocate days, and most recently the Behind the Record Advocacy day. He continues to show the importance of lobbying for creator's rights directly with Congress.

Thank you to all of these nominees who have continued to advocate for the music community throughout their careers!